You're Doin' It Wrong

Sarah Palin has had it rough lately. After the shooting in Tucson, a lot of people realized that a climate of violent political rhetoric is probably not really very awesome, and her campaign image featuring gun crosshairs ("Don't retreat - RELOAD!") over various districts, including Representative Gifford's, has come under particular criticism. She accused the media of manufacturing a "blood libel" for calling her out in this way.

I learned about blood libel in my first freshman year religion class. Know what it is? Historically, blood libel means an accusation against Jews claiming that they murdered children and used their blood in rituals. Such accusations resulted in the expulsion of hundreds of Jews from their homes, or the arrest, torture, and murder of hundreds, and in some cases thousands, of people.

I'm sorry Sarah Palin feels picked on, but it's probably not about equivalent to accusations leading to the murder of thousands of people. 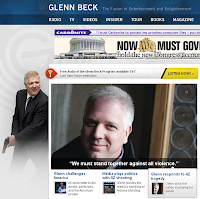 The headline says we should "Stand together against all violence" next to a picture of Glenn Beck holding a gun. This is also missing the point.

(Via Think Progress and Shakesville)
Posted by Katie Casey at 9:52 AM

Email ThisBlogThis!Share to TwitterShare to FacebookShare to Pinterest
Labels: politics