I'm a Girl Cuz I Sew 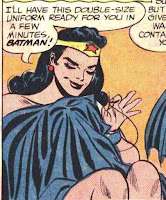 Recently, in one of those random Facebook discussions that sometimes just happens, a friend said that if we had a Greek gods themed party, I'd be Hestia - goddess of the hearth, the "domestic goddess." I thought this was awesome. I often joke that it's a shame I was born too late for compulsory heterosexuality, because I would have made a hell of a housewife. (Perhaps in multiple senses of the phrase, even! What fun!)

And then, in typical me fashion, I started thinking about it, and got all confused.

I do like a lot of traditionally feminine things - in fact, they're very important to me. I cook, I sew, I dabble in knitting and any other craft that strikes my fancy, I follow interior design blogs and recipe blogs and crafting blogs like it's my job. I know men who do all these things too - some much more skillfully than me - but always with the gentle teasing, "are you sure you're not gay?", and I have this unexamined idea that for them the experience must somehow be different.

The only thing I can think of to compare it with is my academic work. I like to think that, if I were to write a research paper and a recipe, the two would be of equal value, theoretically. But if you asked me to pick one or the other, I would probably always go with the research - it feels like a more worthwhile endeavor overall, something I can put on my resume and brag about out in the Real World in a way that I can't brag about my kick-ass lemon scones.

But at the same time, I'm not confident in my voice when I'm doing academic work, even something as mild as, say, writing a blog post with my opinions. I feel, as a student, as a young woman, that my place is probably to listen more than talk, and that I should tread carefully, because there aren't enough hours in the day to read all the books and learn all the theories I would need to understand to speak confidently on any given topic. I tend to defer to experts, and find mountains of citations to back up the smallest thought.

For me, my "voice" when baking, sewing, whatever, isn't like that. I sew the most, so I can speak to that in particular - I feel completely free to experiment, ask questions, and make mistakes in my sewing. If I want to do something and don't know how I trust my friends or Google to help me figure it out, and I can wing it from there in a way I wouldn't dream of winging writing.

I think part of the difference is how I understand those two different skill sets. Sewing is something passed from my great-grandma to my grandma to my mom to me. I hardly had to do anything other than learn how to use the sewing machine without breaking it, and I felt able to sew. I don't use patterns very often - it's all rather slapdash and intuitive. And that's considered feminine, right? Compared to the more stereotypically masculine logic and forethought needed in, say, writing an essay. (By the way, this post did not get that much logic and forethought. Sorry.)

Actually, that reminds me of something we talked about in Psych of Men. "Manliness" is something earned, acted on - as in the expression "man up!" You never hear women told to "Women up!", because "womanliness" is something natural and inherent. I describe my "domestic" hobbies as something intuitive, inherited, easy, compared to always needing to prove myself out there in the "real world."

So maybe that's part of why I identify so strongly as feminine. Because even if that whole public-private, logical-intuitive dichotomy is a bullshit social construct, I personally experience the tension it creates and find myself turning to the "feminine" side for comfort and fun.
Posted by Katie Casey at 3:22 PM

Email ThisBlogThis!Share to TwitterShare to FacebookShare to Pinterest
Labels: gender

I've tried my hand at sewing and cooking and baking. I can't do any of those things the way Allegra does. She just, somehow, turns a bunch of fabric or ingredients into something fantastic. I have to cut, measure, weigh, prod, recut (I once sewed two right sleeves), prod some more...

Writing--a blog post for example--is almost pure instinct. Expressing my thoughts, my ideas, my feelings using words, I give anything other than a story I'm intending to submit for publication one pass through before posting it.

But then, I've only been trying to cook or sew for a very short time indeed. Writing, expressing myself, I've been doing since I was six. It's not that I'm innately 'better' at writing, I've just been doing it an awful lot longer. Women, perhaps, are encouraged--maybe even railroaded--into doing certain things while growing up, so have been doing them for longer, and so find they come far more naturally and easily.

I wish there were a "like" function on Blogger so I could indicate "I really really appreciated this comment even though I can't think of anything else to say!"