For Easter break, my family came to visit! It was tons of fun, and my Dad got lots of great pictures. But what I actually want to talk about is Easter itself, which I actually celebrated properly for the first time in ages.

At home I don't really celebrate Easter - if I'm in college I might go to Flower Communion at my UU church, and if I'm at home I'll come outside for the annual neighborhood egg hunt, but I don't think I've been to a church service for Easter for quite a while now. But I'm a religion major in Ireland and I hadn't yet gone to a Catholic church, so Easter seemed as good a day as any to fix that.

"I'll need an Easter dress," I told Anne, who had no idea what I was on about. Apparently, this thing where one can't attend Easter church services without an appropriately spring-like frilly dress is an American thing, or maybe even just a me thing. But seriously, all my Easter memories involve pastel dresses. Hanging upside down from the Buckley's fence by my pink chiffon Easter outfit? Good times. 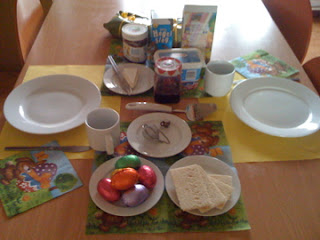 So we went to Penny's and shopped for frilly dresses. Finally we found the perfect one, a beautiful white dress with a lacy overlay. Because it was so perfect, we both bought it. And then we decided we also needed matching cardigans and tights.

The Saturday before Easter, we had our outfits ready, so next we needed to prepare the house. Fortunately, Anne's parents had also visited, and had provided her with tons of Easter-y things - colorful place mats, napkins with bunnies on them, and an incredible amount of chocolate. We woke up early enough to have breakfast, and I got to try this mysterious Dutch thing where they put sprinkles on bread. It was delicious, but I still don't understand. 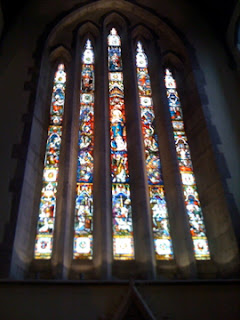 The bus doesn't run early on Sundays, so to get to church, we had to walk. It was a sort of grey morning and dripping on us a bit as we set off along the River Walk, a path that goes all the way along the river Shannon from campus into town - not the most direct route, but certainly the most beautiful, and I had never been much past the bridge on that side of campus. We said hello to all of the joggers and dog-walkers also enjoying the path that morning, probably looking a little bit peculiar (but incredibly adorable) in our matching dresses.

Once we got into town, it wasn't too hard to find St. John's cathedral, one of about a half-dozen cathedrals in the city which we'd selected on the slightly arbitrary standard that it seemed to be the grandest. It didn't disappoint; we arrived early enough to have a look around, and the church had absolutely incredible stained glass, as well as a fantastic alter and a mini Garden of Gethsemane set up at the front! The service itself was a bit hard to follow; they gave us a little pamphlet saying when all the songs and prayers were, but they seemed to jump around, and even Anne, who has actually been to a Catholic church more than once (unlike me), was a bit confused. And the sermon was altogether uninspiring. Easter can be such a great holiday, both in a more literal celebratory sense of believing that Jesus literally came back from the dead, and in a more symbolic sense of enjoying spring and rebirth and the hope of exciting things to come. But the priest kept talking about how solemnly we were supposed to be celebrating (Anne says this is a symptom of his Catholicism), and also insisted that those of us who don't believe in Jesus are just sad all the time, which was a strange thing to hear said about myself on such a fun day. But the choir was very good and it was all quite pretty, and after the service I lit a candle to one of the saints in the back, St. Anthony, because he is one of my favorite. 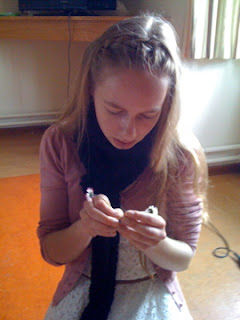 After church, we went home, boiled eggs to paint later, and danced around the kitchen singing Broadway show tunes. Anne had never heard any of the songs from Rent and I hadn't ever heard anything from Billy Elliot (which I now really want to see), but we both knew most of the words to Wicked. Before painting eggs we called over to Matt's house for tea; we brought everyone flower crowns we'd made with daisies we picked on the way home, so we all looked very festive even though it was a bit gloomy outside.

I wish I had pictures of the eggs we painted; we made a few Harry Potter themed eggs, with Snape, Tonks and Voldemort all represented, and Anne did an amazing Tardis egg. My favorite was probably the dinosaur egg I painted, with the egg white that had spilled out when the egg cracked as the dinosaur's spikes, even though it turned out quite sloppy.

I hope that everyone else had a fun holiday too, for those who celebrate it! I'm sad that I missed Flower Communion, because it really is one of my favorite springtime rituals, but it was nice to do Easter so well and with such wonderful people.
Posted by Katie Casey at 11:48 AM

I love that you and Anne had matching dresses. That is adorable.


Sorry that the Catholic Church bit was such a disappointment though!